CANZUK is an acronym standing for Canada, Australia, New Zealand and the United Kingdom. The CANZUK Treaty as outlined by the Canadian Conservative Party looks for the following objectives:

The four CANZUK countries have a Westminister based style of parliament and a Common Law Political System Based on the Magna Carta. “Australian Values”, “New Zealand Values”, “Canadian Values” and “British Values” are very similar to each other. See The British Heritage of our Freedoms The Untold Stories – IPA – The Voice For Freedom (The British Heritage of Australia’s Democracy).

Moreover the 4 nations already share a Language (with the exception of Quebec who are mostly bilingual and have strict language laws in place to prevent them from being drowned out by Canadian English Speakers). These four nations even share a Head of State. The policies and ethos of the four countries, including trade standards already naturally align and there should be less political friction across CANZUK than other blocks such as the European Union which have to compromise to align several mismatched political systems. Because of the above, alongside a shared language it should be possible to ensure that an Australian teaching qualification, policing qualification, doctor, lifeguard or paramedic for example is valid in the rest of CANZUK and perhaps even setup cross-CANZUK student exchanges and placements.

A free trade between the four CANZUK countries will increase trade between the four CANZUK countries. The four nations have a common trade outlook and push globally for free trade providing goods are up to a required standard. Unlike the European Union, the four CANZUK countries don’t want to build a protectionist block, therefore a CANZUK free trade agreement will not prevent the fact that Canada trades more with its nearest partner the United States, Australia and New Zealand more with the Chinese Market or the United Kingdom with the European Union. However at this moment in time, Canada’s nearest partner the USA is acting protectionist, Australia and New Zealand’s relationship with China is rocky and the United Kingdom is having difficulties negotiating with the EU. The four CANZUK nations working together would to their mutual benefit have more success establishing and maintain free trades.

Each CANZUK country holds each other to a high regard and in many ways the CANZUK Treaty facilitates the already high level of existing reciprocal immigration between the four countries. While at this time, it may seem odd to advocate for a Free Immigration Agreement as many of the CANZUK countries are reported to exhibit an anti-immigration sentiment however consistent polling shows the desire for making inter-CANZUK immigration easier:

There is a two-thirds majority for free movement between Canada, Australia, New Zealand and the UK (“CANZUK”). This is a clear-cut example of where immigration policy can be liberalised with public support. Free movement between these countries should be introduced immediately, ideally on a reciprocal basis, or unilaterally if not.

The four countries have compatible socio-economic factors. These are important as  they allow for a reciprocal free immigration agreement opposed to mass-migration from one country to another, unstabilising the social fabric of both. In terms of population the UK has the largest population which is approximately the sum of Canada and Australia. New Zealand has the smallest population but is happy with the existing Trans-Tasman agreement existing between New Zealand and Australia. It is also polled to be the most supportive of the CANZUK idea. 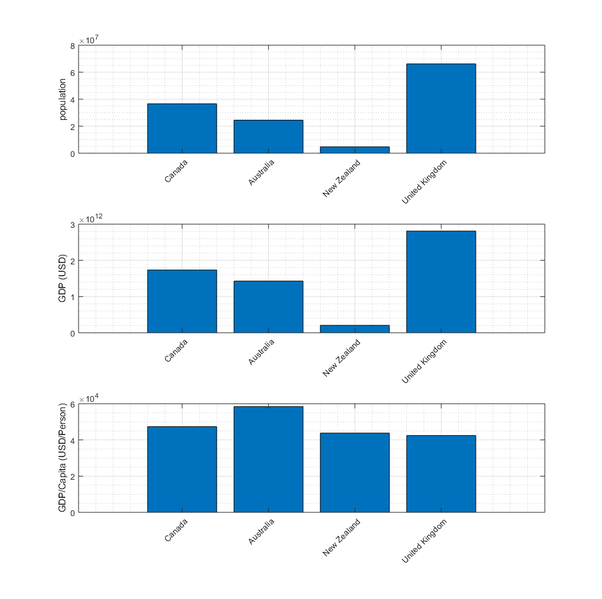 The next metric is GDP and more importantly GDP/capita. The 4 CANZUK countries have a very similar GDP/capita with Australia having the highest GDP/capita however is happy enough to have the Trans-Tasman agreement with New Zealand suggesting all four countries have a compatible GDP/capita for a viable reciprocal free immigration agreement.

In many ways the CANZUK Treaty facilitates the preferred immigration pathways for CANZUKcitizens. There is also a large intermarriage between CANZUK citizens.

The health care systems of all CANZUK nations are socialised opposed to the USA’s heavily capitalised insurance based system in place. Thus it would be possible to set up reciprocal healthcare for all CANZUK citizens when they visit other CANZUK countries (this is actually partially in place).

The point of a visa is usually to check if someone has enough money in their bank to sustain themselves and to pay for insurance etc etc. e.g. for example in the USA, American Immigration need to ensure that people visiting their country for extended periods of time have the money required to buy private insurance required to cover their healthcare. This would of course need to be reciprocated i.e. visas given to Americans for CANZUK visits and checks to make sure they have private healthcare otherwise CANZUK would just be a place of healthcare tourism for those living in the USA. These political incompatibilities are an example of why the USA is not included in the CANZUK treaty.

There is a very high inter-CANZUK trust. The Lowy Institute Poll found that almost all adult Australians (90%) trust the United Kingdom to ‘act responsibly in the world’ compared to a bare majority (55%) who say they trust the United States either ‘a great deal’ or ‘somewhat’ to act responsibly. Canada, Australia and the UK already share a number of embassies across the world which highlights the shared trust in the CANZUK governments. The back cover of important notices in the Canadian Passport contains the following:

In case of the unavailability of a Canadian Embassy or Consular office, please go to a British or Australian office.

N.B. shared embassies between Canada, Australia and the UK occurred while the UK was in the EU well before the notion of a “Brexit”… Once Brexit takes place the UK will be freer to interact with Canada.

A situation quite telling that the UK would pick Canada and Australia to embassy share with over an EU country and a sentiment to show how closely the countries interests overlap. However having a shared language, history and culture helps with this.

The fact that Canada has the same time-zone as America, Australia and New Zealand with Asia and the UK with Europe is often seen as a disadvantage however it actually holds many advantages to CANZUK consumers. If a British Customer is travelling in Asia and loses their bank card for instance and the UK Office is closed, they would instead be able to contact the Australian Office or Canadian Office. Free Trade including the Service Industry would allow the four countries to complement one another office hours CANZUK and create a 24/7 service.

The general public have a great interest and understanding in the forces from the CANZUK countries with many Australians, Canadians and New Zealanders attending remembrance Sunday in London and in Australia as a testament to the number of British and Canadians that attend ANZAC day, the online form lists the nationalities in order: Australian, New Zealander, British, Canadian, American then by other country alphabetically. The armed forces across the CANZUK have a shared origin and to this day share many traditions with each other. The Australian, New Zealand and previously Canadian national flag are indeed improved British Naval Ensigns.

The four CANZUK countries share a common language, both cultural and politically and even share a Monarch. At present it is possible for someone from CANZUK to enroll in the UK armed forces, even if they have never stepped foot in the UK.

CANZUK alongside the United States make up the 5 Eyes, the world’s most complete and comprehensive intelligence alliance. It is likely that CANZUK will work together to build the next generation Satellite system.

Satellite technology is not just a crucial tool for our Armed Forces but vital to our way of life, whether that be access to our mobile phones, the internet or television. It is essential we protect our interests and assets from potential adversaries who seek to cause major disruption and do us harm.

Since CANZUK looks for Free Trade in Goods and Services, Increased Consumer Choice and Protection for Travel and Security Co-ordination. It is likely that a Global CANZUK Mobile Network will be created meaning a CANZUK citizen would be able to travel within CANZUK or perhaps the world without Roaming Charges.